Wardray Premise X-ray Protective Screens are manufactured from a series of solid panels with a lead core faced on both sides by plastic laminate. Fixed angle joints are fully lead protected. Hinged wings are available with full protection and are fitted with a foot operated door holder.
The minimum recommended height is 2000mm in a panoramic style with 1000mm high solid panels and 1000mm high lead glass to the top edge. As all screens are purpose made any other combination of solid panel and glass can be accommodated. We recommend that using lead glass in stock sizes will eliminate waste and offer a more cost effective solution.

Lead Foil Screens
Lead foil screens are often used to enhance the radiograph when using X-rays in the range of 150 to 400 kV. The screens increase the exposure of the film largely due to electrons emitted by the screens during an exposure. The following are a few experiments that can be performed to investigate the effects of lead foil screens.
Experiment #1 - Using Lead Foil Screens
Locate a plate of steel approximately ¼ inch thick and 4 inches wide by 5 inches long. Drill a number of holes in the plate.
Load a film cassette with a type 1 film.
Load a second film cassette with a second piece of film and place a 0.005 inch thick lead screen on the source side and a 0.010 inch thick lead screen on the backside.
Place the steel plate of the film cassette and expose the film at 150 kV to create a radiograph with a density of 2.0 to 3.0.
Radiograph the plate a second time using the film pack with screens. Expose the material at similar kV / mA settings but the exposure time will need to be increased since the lead will absorb a portion of the long wavelength radiation.
Process the films and compare on the viewer to determine if the lead produced a sharper, higher contrast radiograph.
More contrast and definition should be seen in the image produce with the screens.

The lead rubber is a kind of protective products, which can be used to make all kinds of X-ray products such as lead coats, lead cap and protective screen, etc. The lead rubbers manufactured by our company have many kinds of specifications and sizes.

Adopting the newest compounding and design, it has reached the leading level of being the most light, thin and soft materials of the world. Having even distribution of the lead, the performance of the protection is perfect. Under the normal use, the lead equivalent will not attenuate. It is wearable. 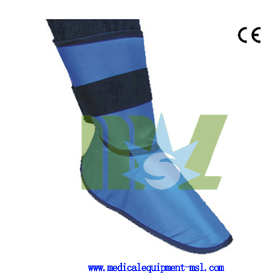