Point-of-care testing (POCT), or bedside testing is defined as medical diagnostic testing at or near the point of care—that is, at the time and place of patient care.[1] This contrasts with the historical pattern in which testing was wholly or mostly confined to the medical laboratory, which entailed sending off specimens away from the point of care and then waiting hours or days to learn the results, during which time care must continue without the desired information.
Point-of-care tests are simple medical tests that can be performed at the bedside. In many cases the simplicity was not achievable until technology developed not only to make a test possible at all but then also to mask its complexity. For example, various kinds of urine test strips have been available for decades, but portable ultrasonography did not reach the stage of being advanced, affordable, and widespread until the 2000s and 2010s. Today portable US is often viewed as a "simple" test, but there was nothing simple about it until the more complex technology was available. Similarly, pulse oximetry can test arterial oxygen saturation in a quick, simple, noninvasive, affordable way today, but in earlier eras this required an intraarterial needle puncture and a laboratory test; and rapid diagnostic tests such as malaria antigen detection tests rely on a state of the art in immunology that did not exist until recent decades. Thus, over decades, testing continues to move toward the point of care more than it formerly had been. A recent survey in five countries (Australia, Belgium, the Netherlands, the UK and the US) indicates that general practitioners / family doctors would like to use more POCTs.
The driving notion behind POCT is to bring the test conveniently and immediately to the patient. This increases the likelihood that the patient, physician, and care team will receive the results quicker, which allows for better immediate clinical management decisions to be made. POCT includes: blood glucose testing, blood gas and electrolytes analysis, rapid coagulation testing (PT/INR, Alere, Microvisk Ltd), rapid cardiac markers diagnostics (TRIAGE, Alere), drugs of abuse screening, urine strips testing, pregnancy testing, fecal occult blood analysis, food pathogens screening, hemoglobin diagnostics (HemoCue), infectious disease testing and cholesterol screening.
POCT is often accomplished through the use of transportable, portable, and handheld instruments (e.g., blood glucose meter, nerve conduction study device) and test kits (e.g., CRP, HBA1C, Homocystein, HIV salivary assay, etc.). Small bench analyzers or fixed equipment can also be used when a handheld device is not available—the goal is to collect the specimen and obtain the results in a very short period of time at or near the location of the patient so that the treatment plan can be adjusted as necessary before the patient leaves. Cheaper, faster, and smarter POCT devices have increased the use of POCT approaches by making it cost-effective for many diseases, such as diabetes, carpal tunnel syndrome (CTS) and acute coronary syndrome. Additionally, it is very desirable to measure various analytes simultaneously in the same specimen, allowing a rapid, low-cost, and reliable quantification. Therefore, multiplexed point-of-care testing (xPOCT) has become more important for medical diagnostics in the last decade.
Location:Home > POCT
MSLRDT014 Reliable Typhoid Rapid Test Cassette 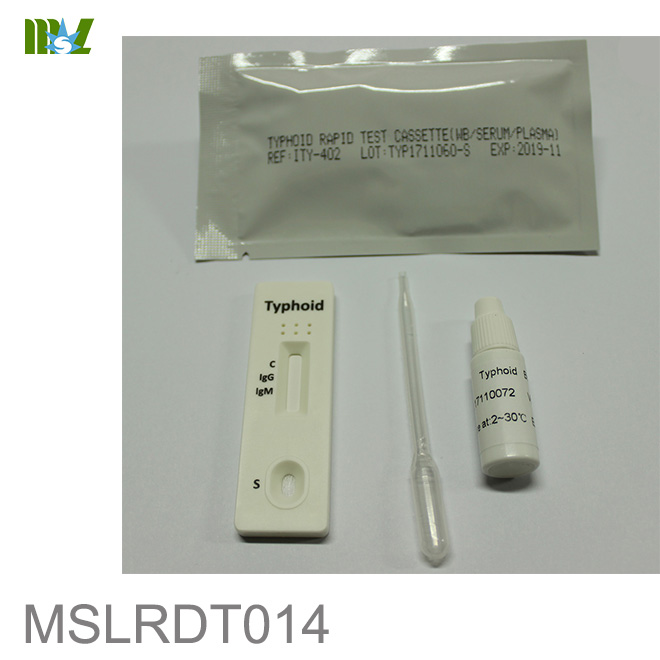 6. IgG and IgM combo. Screening of Typhoid current or past infection.

A rapid test for the qualitative detection of lgG and IgM antibodies to Salmonella typhi (S. typhi) in human whole blood, serum or plasma specimen. For professional in vitro diagnostic use only

[INTENDED USE]
The Typhoid Rapid Test Cassette is a rapid chromatographic immunoassay for the simultaneous
detection and differentiation of IgG and IgM types of antibodies against Salmonella typhi (S. typhr) in human serum or plasma. It is intended to be used as a screening test as an aid in the diagnosis of infection with S. typhi. Any reactive specimen with the Typhoid rapid test cassette needs to be confirmed with alternative testing method.

6. IgG and IgM combo. Screening of Typhoid current or past infection.

[SUMMARY]
Typhoid fever is caused by S.加hi, a Gram-negative bacterium. World-wide an estimated 17 million cases and 600,000 associated deaths occur annually'. Patients who are infected with HIV are at significantly increased risk of clinical infection with S. typhi2. Evidence of h. pylori infection also presents an increase risk of acquiring typhoid fever. 1一%of patients become chronic carrier harboring S. typhi in
the gallbladder.
The clinical diagnosis of typhoid fever depends on the isolation of S. typhi from blood, bone marrow or a specific anatomic lesion in the facilities that cannot afford to perform this complicated and time consuming procedure. Widal test (also referred as Weil Felix Test) is used to facilitate the diagnosis.
however, many limitations lead to difficulties in the interpretation or the widal test.
In contrast, the Typhoid Rapid Test Cassette is a simple and rapid laboratory test. The testsimultaneously detects and differentiates the IgG and the IgM antibodies to typhi specific antigens inwhole blood, serum or plasma thus aid in the determination of current or previous exposure the S. typhi.
[PRINCIPLE]
The Typhoid Rapid Test Cassette is a qualitative, membrane based immunoassay for the detection of antibodies (IgG and IgM) to Salmonella typhi (S. typhr) in human whole blood, serum or plasma. The diagnostic test cassette consists of two components: an IgG component and an IgM component. The
IgG line region is pre-coated with reagents for the detection of anti-S.typhi (IgG). The IgM line region is pre-coated with monoclonal anti-human IgM for detection of anti-S. typhi (IgM).
During testing, specimen dispensed into the sample well of the test cassette binds with Typhoid conjugates impregnated in the reagent area, if the specimen contains anti-Typhoid antibodies. The immunocomplex thus formed m心rates by capillary action. If the present antibodies in specimen are of
IgG types, the immunocomplex is then captured by the pre-coated reagents on the membrane, forming a colored IgG line, indicating a S. typhi IgG positive test result. If the present antibodies in the specimen are of IgM type, the immunocomplex would be captured on the membrane by the pre-coated anti-
human IgM antibody, forming a colored IgM line, indicating a S. typhi IgM positive test result.
Absence of any T lines (IgM and IgG) indicates a negative result. A colored control line (C) should always appear in case of a positive or a negative result. Its absence indicates invalid test results
[REAGENTS]
The test contains mouse anti-human IgM, mouse anti-human IgG and Typhoid antigen. A goat antibody is employed in the control line system.

Welcome to medicalequipment-msl.com,If you have any demand in ultrasound machine.